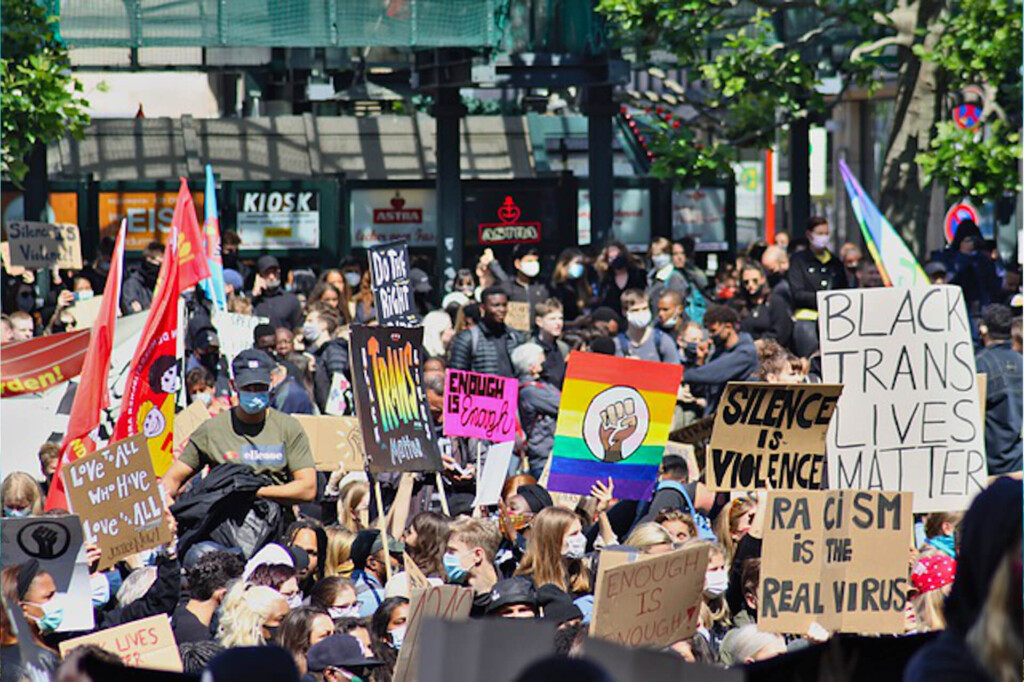 Are white people even allowed to write about racism? Probably not. I still want to chance it. I want to ask us to be honest with each other. Racism is neither an American problem nor a black problem. Racism is a human problem. It’s not an individual issue either. It is of no use if we all now rush to participate in Black Lives Matter demonstrations just to prove that we, personally, are no racists. Racists – that‘s the others! This is not getting us anywhere. Racism is everywhere. Our whole world is permeated by racism and has been for centuries, maybe even millennia.

Of course it is important that we take a stand now. That we raise our voices and state clearly: “I don’t want this. It hurts me. I am ashamed. We need a change and we need it now!“ But if we are serious, we must admit that racism is deeply woven into the current world order and probably into every culture on every continent. We have to admit that we are part of these cultures and this world order, that we benefit from it or suffer from it. Probably both.

As long as we hold on to a system that depends on winners and losers, we will not find peace. Yes, it is shameful and shocking that in 2020 people of dark skin color are still disadvantaged everywhere, systematically. But is it really enough to ensure that skin color is evenly distributed on the infinitively long social ladder? Do we want to live in a world where there is no longer any discrimination on the basis of skin color, but where the ruling system inevitably creates losers, who are underpaid, exploited, criminalized and marginalized? I do not want that. And it’s not about saving my white behind. I want to live in a world where everybody is well, no matter what color, also no matter what species. I want that because what is happening in this world breaks my heart. And no, a little fair trade and one-world romance is not enough to ease my conscience. I don’t even want to ease my conscience. I don’t want this whole pseudo-wealth at the expense of others. I want justice. For everyone. Now.

Rethinking wealth
The white man’s model of prosperity has been based on oppression and exploitation for centuries. This has not changed since the alleged, much celebrated end of the colonial era. The cleverly chosen term “developing country“ suggests that those countries where people with darker skin color live will soon catch up with us thanks to our generous help. They will then also be able to enjoy our fantastic achievements. That is a lie. No one can live like us without trampling on the rights of other people and other species. Of course it is no coincidence that these other people usually have darker skin. Of course it’s racism. But it’s a lie to pretend we can solve the problem by teaching a bunch of racist idiots to rethink.

Racism is, historically speaking, an ideology that was first invented to legitimize slavery, and then later colonization and genocide. Just as this racism lives on in our minds, the systematic injustices it has created live on in our system.

Today, injustice is ideologically legitimized in a different way: the myth of meritocracy says that we have earned our status through merit. In terms of racism, the slogan “equal opportunities for all“ demands that in this competition for privileges no one should be discriminated against on the basis of skin color. That is of course important. But it does not question whether it is all right that we still have such a gigantic inequality of wealth distribution. And it ignores the fact that, generation after generation and with alarming reliability, the education system worldwide is sorting the already disadvantaged downwards and the elite upwards. As a result of centuries of systematic discrimination, which continues to this day, the skin colors on the lower end of the social ladder are becoming darker and darker and the system ensures de facto that this remains so. Therefore I find it hypocritical to talk about racism without addressing social inequality from a structural point of view.

We need a change of system and we need it to be fundamental. This will also mean completely redefining what prosperity actually is. Yes, this new prosperity will mean fewer things, less luxury, less comfort, less unnecessary frills. But we will be able to look in the mirror without constantly asking ourselves whether we are wanton enough for all these excesses. We are not and we know it. And even more importantly: we will be able to be friends with all people, no matter where they come from or what color they have. We will no longer have to maintain artificial barriers to keep people out of our countries. And we will no longer have to fly halfway around the globe to find the down-to-earth, the authentic, the natural. We will learn to live it ourselves again.

Racism is a convenient problem
It may sound extreme but racism is a convenient problem. For whom? Especially for those who benefit from the status quo. As long as we deal with racism, we are not concerned with the deeper underlying problem: the massive social inequality. As long as parties and politicians are vying to position themselves as xenophobic or critical of migration, we are not talking about the real issues: our current economic system is based on exploitation, fosters inequality and profits from it. We can get incredibly upset that people have such racist ideas or are xenophobic – always the others, of course – without asking ourselves why there are so many people who are not doing well. It is also much more convenient for corporations to discuss why there are hardly any people with dark skin tones on the executive floors, rather than thinking about whether it is justified that the top managers earn three to four hundred times more than those earning lower wages in the same company. A few decades ago, the ratio between top and low income in the private and public sectors was one to ten or twenty.

Meanwhile, in the name of free trade, environmental and social standards are being further eroded, the rich are getting richer and richer and the number of those who toil away in undignified conditions is increasing. Unfortunately, the assertion that the poor will also be increasingly better off if the rich get richer and richer has proved to be a farce. The winners of the system like to quote statistics on how much poverty has fallen worldwide as a result of their profit motive. However these statistics assume for example that people in the USA are doing well provided for at USD 1.90 per day. And then we are surprised at the rising number of crimes and violence among the losers. Racists see this as confirmation of their conviction that dark people are inherently criminal and violent. The anti-racists are angry about the terrible police, who have the thankless job of keeping the „mob“ in check. But why are people so angry anyway?

Getting upset about the fact that it is mainly people with dark skin who have been on the losing side for centuries is justified, but it does not go far enough. Let us talk about inequality and discrimination. Let us advocate a change of system. But let’s do it right. Let us not be satisfied with compromise or sham solutions. Let us recognize that, while we are busy discussing racism, the world continues to be divided into winners and losers.

Racism is real and people die from it, every day. But only a small percentage of them dies as a result of direct violence by the police. The vast majority die as a result of systematic, structural violence. If we approach racism as an isolated phenomenon, we will achieve at most that people of all skin colors are exploited and die. That is not justice. It is merely a shift in the problem. And it is not going to make us feel better. Because the current system hurts us all, even the alleged winners.

A New Dream
How about daring a new dream: what if we used our political systems to give the economy a healthy framework? What if the economy were to return to its true purpose, which is to meet the needs of all people, while respecting the natural limits of our ecosystems? When we realize that our hyper-consumption does not make us happy, we can rethink what really makes a good life. Once we honestly admit that in the midst of all these things that are increasingly consuming our lives, we can no longer breathe, we will be able to stop propagating a false image of prosperity all over the world that lures people here under false promises.

There is enough for everyone. A good life for everyone is possible, everywhere. And it will be better for all of us if we set out together to make this a reality.

Vivian Dittmar is founder of the Be The Change Foundation For Cultural  Change and author of several books on feelings, relationships and consciousness. Her childhood and adolescence on three continents in different social contexts allowed her to develop an early awareness of the global challenges of our time and are her drive to find and implement holistic solutions. Her last book, which was published in German in spring 2021 by Penguin Random House, addresses the question what True Prosperity might be.